Bundesliga 'ready to return on 9 May' 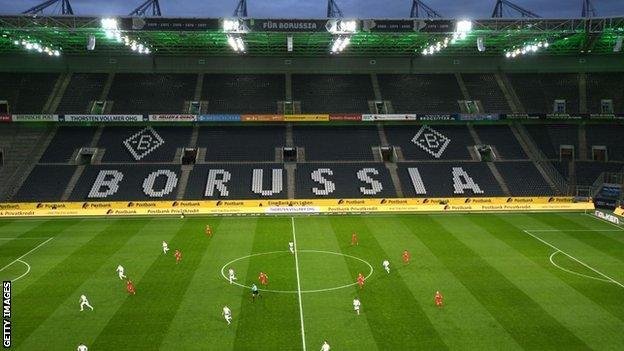 Despite football being halted across the globe by the coronavirus pandemic with all major leagues and competitions suspended, the Bundesliga is now eager to return to action with plans to play spectator-free games in May.

Germany has led the way in its approach to combating the coronavirus pandemic. The country's intense program of consistent testing from early on has resulted in far fewer deaths than the worst-affected countries.

The German Football League (DFL), responsible for operating the Bundesliga and the second division, is determined to finish the current season. Its 36 professional clubs met on Thursday to discuss a restart of the season next month. However, Germany's football authorities still face some huge questions before they get the green light to resume football in the country behind closed doors.

"If we start on 9 May, we are ready. If it is later, we will be ready again," DFL chief executive Christian Seifert said on Thursday.

"For us, what is decisive is what the politicians will decide. It is not for us to decide when.

"Games without spectators are not what we want - but at the moment the only thing that seems feasible."

So, what challenges do they face and how are they planning to combat them?

What will Germany's government say?

German politics has recently decided that large events with crowds will be banned at least until 24 October. That rules out the Bundesliga being played in front of spectators until the scheduled start of next season.

The only way to work around regulations is to stage spectator-free games, with only players, coaching staff, medics, referees, ball boys and ball girls, ground staff, technicians, safety officers, and production staff for television and VAR being present inside the stadiums. League officials estimate that up to 300 people are needed per match.

In Germany, the 16 federal states determine the maximum number of people allowed for public gatherings and a decision about that number will be made by the end of April.

The governments could put a stop to any plans from the DFL, but they are aware of the economic struggles of professional football and are expected to grant the wish of the clubs.

"A weekend with football is much more bearable than a weekend without football. That's why I could picture to have matches behind closed doors", Markus Soder, state premier of Bavaria, said at a recent online talk show hosted by German newspaper Bild.

He and Armin Laschet, state premier of North Rhine-Westphalia, have said they think it's conceivable the Bundesliga would restart as soon as 9 May.

Soder and Laschet rushed ahead with their statements, knowing the federal government and the 16 state governments meet on 30 April, with the likely outcome that football matches are allowed to be staged in the following months.

Staging professional football games even with only a few hundred people present becomes a logistical challenge. A few weeks ago, the DFL set up a task force to define the necessary medical and hygiene protocols which would be required.

According to the plans of the task force, the stadiums will be divided into three zones. Only a maximum of 100 people can be in each of these sections. The inner section belongs to the 22 players, 18 bench players, five referees, and around 53 others. The stands are considered the second section, and the area directly surrounding the stadium is the third one.

The plans also include regular testing of players and coaches between training sessions and before every match. Alexander Kekule, a biochemist from Martin Luther University in Halle, estimates that the DFL would need up to 20,000 detection tests and exceptional organizational measures.

He said: "Players have to be shielded under specific safety rules to prevent infections because they are not able to avoid contact on the pitch."

Regular testing could create a headache from a practical standpoint because it is impossible to know whether a player is already infected when he takes to the pitch.

"It takes a couple of days before someone, who has contracted the virus, tests positive," Martin Eichner, an epidemiologist from the University of Tubingen, explains. He dismisses the option of faster detection tests that have been in development, as they are not fully reliable yet.

Others have expressed concerns about the moral implications. "Tens of thousands of tests would be needed that is missing in nursing facilities", Karl Lauterbach, health expert for the Social Democratic Party (SPD), recently tweeted.

The DFL disputes these concerns. "Any assumption that possible continuous testing will cause a shortage of supplies for the general public ignores the facts. Testing capacity has been increased massively in recent weeks," the DFL executive committee stated in a press release on Tuesday.

There are currently 640,000 tests available per week in Germany. The Bundesliga and second division would require about 0.5% of these tests.