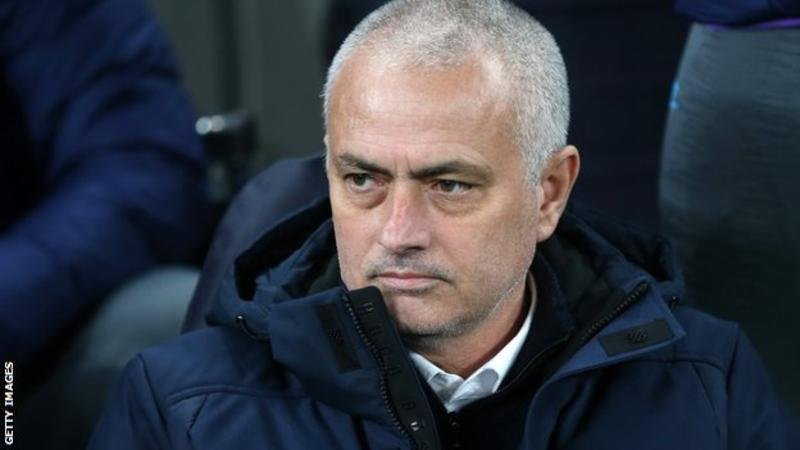 When Frank Lampard meets his old mentor Jose Mourinho at Stamford Bridge on Saturday, the stage will be overloaded with sub-plots.

Chelsea manager Lampard is suddenly struggling to maintain a place in the top four after one win in six Premier League games, and they were beaten 2-0 at home by Manchester United on Monday. Spurs, who closed to within four points of Chelsea after their 3-2 win at Aston Villa, have seen their optimism punctured - first by Son Heung-min joining Harry Kane as a long-term injury absentee, then when RB Leipzig left their Champions League hopes in jeopardy with victory in the last-16 first leg at Tottenham Hotspur Stadium. Mourinho's return to the club where he won three league titles is always pure theatre. Returning with bitter rivals Spurs only adds to the sense of spectacle. So what are the big questions before Saturday's lunchtime meeting at Stamford Bridge?

Is Lampard feeling the heat?

Lampard is facing the first serious questions during his time as manager of Chelsea - not from the supporters but simply because his team has lost momentum badly. He performed impressively in the early months of the season, blooding youngsters such as Tammy Abraham and Mason Mount while Chelsea operated under a transfer embargo. But in recent weeks, with a barren January transfer window clearly causing consternation as Chelsea failed to bring in a striker, the gloss has faded somewhat.

Lampard had every right to criticise VAR on Monday after Manchester United's Harry Maguire was not sent off for kicking out at Michy Batshuayi and what would have been a Kurt Zouma equaliser was arguably harshly ruled out - but the current Chelsea malaise cannot be disguised. He has major issues to resolve, not least the failure to convert possession and chances into goals that is now threatening Chelsea's hopes of qualifying for next season's Champions League. Lampard's own selections must also come under scrutiny. He showed conviction by dropping £71m keeper Kepa Arrizabalaga but there was surprise in many quarters when he kept faith with 38-year-old Willy Caballero on Monday after suggesting the Spaniard had responded well to being left out. It may also have dawned on Chelsea's decision-makers that a lengthy Arrizabalaga absence means they will have trouble clawing back anything like that exorbitant fee, should Lampard want a new keeper in the summer as seems likely.

And what about Lampard's refusal to use Olivier Giroud? Lampard gave Batshuayi his chance with Abraham out injured against United but he looked short on confidence and quality, feeling Stamford Bridge's wrath on occasions before being substituted. The 33-year-old France striker, who may even have joined Spurs had Chelsea signed a forward in January, looked more dangerous in 22 minutes than Batshuayi did in more than an hour, providing a focal point and having a goal ruled out. Lampard announced "the season starts now" on Monday - a bold statement and one his team must back up quickly.

Worryingly, Chelsea have lost seven home games in all competitions this season, the most since 1994-95, and have lost all five home games when conceding first. Mourinho will have noted this flaw. Lampard is right to say few would have expected his side to be fourth at this stage of the season given they started it operating under transfer restrictions - but that will be no consolation if their season now falls away.

Mourinho will have started the week with spirits soaring after the dramatic late win at Aston Villa - and while there has been adversity since then there are still reasons for optimism. He plots his return to Stamford Bridge having closed a gap between Spurs and Chelsea that was 12 points when he succeeded Mauricio Pochettino on 20 November to just four - so victory on Saturday would mean a return to the top four. Only Liverpool, with 42 points, have picked up more than Mourinho's 26 in that time but one defeat may just shape the Stamford Bridge agenda.

Mourinho's elephantine memory will recall how he was totally outflanked tactically by Lampard when Chelsea won 2-0 at Spurs on 22 December. Spurs have won 14 points to Chelsea's nine in the period since then but Mourinho is unlikely to have forgotten how he was so comprehensively outsmarted that day. Lampard's decision to use a three-man central defence of Antonio Rudiger, Zouma and Fikayo Tomori caught Mourinho, who usually prepares for all eventualities, totally off guard and Chelsea eased to victory.

How will the Portuguese respond on Saturday? Will the pupil Lampard have another surprise up his sleeve against the seasoned tactician?

Nevin said: "Frank did him tactically in the first game. It hurts him when anyone does that. I think he will now be ready for everything, although you have to remember Jose was just in the door then.

"He was learning about his players, their capabilities and what suited the team best but he doesn't like anyone tactically outflanking him.

"I think it was because Frank used something that was so unexpected. He went so similar in style to the Maurizio Sarri system and it was the last thing that was expected. Chelsea managed to get ahead in the game, establish that platform and pushed on from there.

"I suspect Frank has more questions to answer at the moment, more decisions to make system-wise. It will be a really intriguing tactical battle.

"I think the two of them will try to pull a surprise. I don't know what it will be but I can certainly see that happening. I'll be almost as interested in what's going on in the technical area as the game."