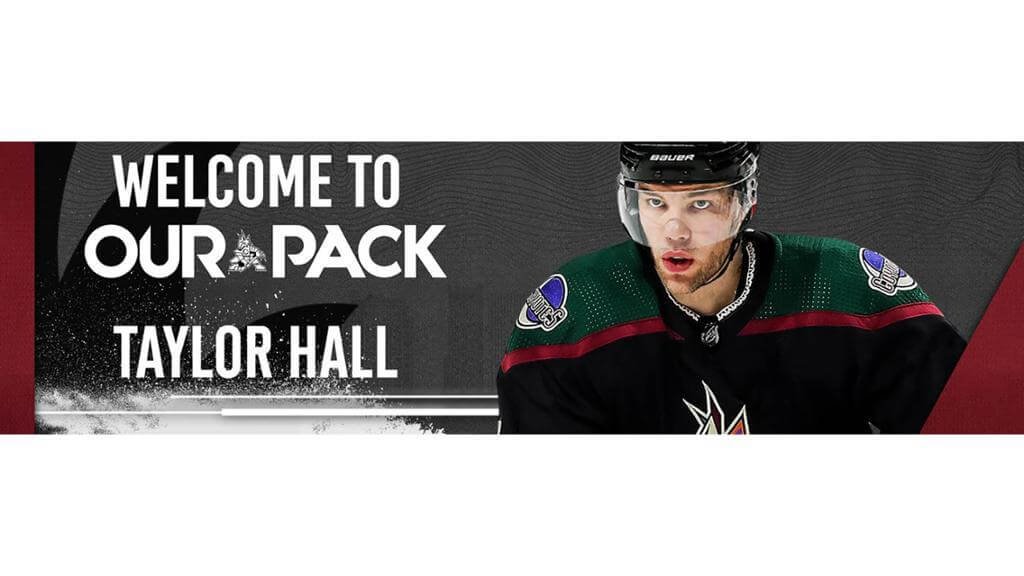 GLENDALE, Ariz. -- The Arizona Coyotes bought digital billboards in multiple locations in the Phoenix area, showing forward Taylor Hall in a Kachina jersey with the words "WELCOME TO OUR PACK."

Hall didn't see them himself.

After the Coyotes acquired him from the New Jersey Devils in a trade Monday, he flew to San Jose, landed at 7:30 a.m. PT on Tuesday, assisted on the winning goal in a 3-2 victory against the San Jose Sharks, flew to Phoenix, landed at 1:45 a.m. MT on Wednesday and crashed in a hotel.

"I was pretty groggy this morning," Hall said with a laugh in a press conference Wednesday.

Still, he got the message.

"I mean, that's awesome," he said. "That's one of the great things about what's going on here. There seems to be a buzz building and some excitement.

"We talk a lot about the on-ice [subjects] and structure and all that. But at the end of the day, we're entertainment for people, and hopefully guys like myself and a lot of these other young players -- and really the team that we have here -- hopefully we can keep building that."

Hall is a hockey player at heart. Repeatedly, he has said he just wants to play, fit in and win. He said he chose No. 91, representing his birth year, because he had worn Nos. 4 and 9 earlier in his NHL career, those numbers were taken in Arizona, and he didn't want to be "that guy to try to take a number." It wasn't that important to him.

But he's more than a hockey player here. He won the Hart Trophy when voted the NHL's most valuable player in 2017-18, and his acquisition is another illustration of what general manager John Chayka called a "paradigm shift" in the way the Coyotes operate under new owner Alex Meruelo.

The Coyotes are making a statement to their fans and to Hall, who can become an unrestricted free agent July 1.

The billboards will be up through Monday. Hall jerseys were being made Wednesday in anticipation of his home debut against the Minnesota Wild at Gila River Arena on Thursday (9:30 p.m. ET; SN360, SNE (JIP), SNO (JIP), FS-A, FS-A PLUS, FS-N, FS-WI, NHL.TV).

The press conference was to introduce Hall to the local media, with Hall pulling on a No. 91 Kachina jersey for a photo op between Chayka and coach Rick Tocchet. The end of Chayka's opening remarks seemed meant for the media, the fans and Hall. He said everything he and Tocchet had done was about winning, and after doing their due diligence, the Coyotes knew winning was Hall's sole focus.

"So in that sense, from ownership up top to management, coaching staff, all the way down to the players and Taylor, there's complete alignment, and that's what we're about," Chayka said. "With that being said, I want to welcome Taylor to the pack."

"I think I've had a good blend of different markets," Hall said. "Being in Edmonton was crazy right off the bat, and I think that kind of taught me how to act away from the rink, how to conduct yourself. And in Jersey, I grew a lot as a player, as a leader, had some really good coaches and front office staff that guided me in the right direction.

"And here, I don't want to say I'm a finished product, but I like to think I know what I can add to a team, how I need to play and how I can be a leader, and as the season goes on, that'll continue to grow."

Who knows what the future holds? Chayka and Hall spoke briefly about Hall's contract, and the plan is to focus on hockey and speak again after the season.

But repeatedly, Hall has said he has an open mind. He has done his own due diligence, and at the very least, the Coyotes have made a good first impression. That overnight flight he took to San Jose was on a private plane sent by Coyotes minority owner Andrew Barroway.

"I've talked to a few guys, players that have played here in the past, players that play here currently, people that know Rick, people that have been around John for a long time," Hall said. "And I really couldn't get a negative word, honestly, from the way that they treat the players, to the on-ice product and how they want you to play, the plane, the climate, the rink, the facilities.

"Everything's been really good, and it's lived up to its reputation. Over the last day and a half, I've witnessed how easy they've made it on me, and already I'm feeling a lot more comfortable …"

Hall paused for a split second.

"A lot more comfortable," he repeated, "than I thought I would be at this point."