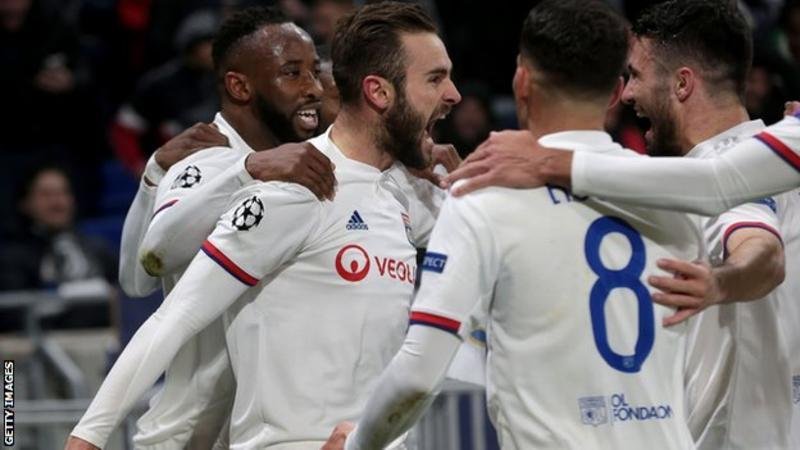 Lyon produced a spirited display to take a surprise lead after the first leg of their Champions League last-16 tie with Juventus.

Lucas Tousart scored the only goal in the first half as the hosts claimed their first victory over the Italian giants.

Juve started confidently but failed to create any clear chances before Tousart converted Houssem Aouar's cross from close range to hand the Ligue 1 side the lead. The visitors continued to have more possession but they struggled to penetrate the resolute Lyon defence, failing to register a single shot on target.

With the clock ticking down, Juve ramped up the pressure, but Paulo Dybala's late strike was ruled out for offside. The second leg will take place at Allianz Stadium on 17 March (20:00 GMT).

Juventus have won the last eight Serie A titles, and they were one of the pre-tournament favourites to win the biggest prize in European club football, but they will have to come from behind to progress in this season's competition. The visitors had over 60% possession but they were sluggish going forward, as an attack including Cristiano Ronaldo, Dybala and Juan Cuadrado failed to test Lyon goalkeeper Anthony Lopes.

Ronaldo carried their greatest threat and two of his lofted crosses caused brief moments of panic in the Lyon ranks, but he too was below par as he fired wide on four occasions from good positions. There were also problems at the back, despite stellar summer signing Matthijs de Ligt returning to the defence, as Lyon enjoyed success from out wide.

Karl Toko Ekambi fired a warning shot when he drifted to the near post to head a corner against the crossbar, before the impressive Aouar picked out Tousart to hit the winner with a well-weighted square pass.

The goal came while De Ligt was off the field receiving attention for a cut on the head, but Juve continued to struggle at set pieces as they continue to adapt to their new zonal marking system, something experienced defender Leonardo Bonucci has said is "complicated".

Juventus have made it past the Champions League last 16 in four of the past five seasons, but they have not won the title since 1996 and manager Maurizo Sarri has previously said he "feels the weight of responsibility much more in Italy". Sarri's side will have home advantage in the second leg but an away goal for Lyon would intensify that pressure on the former Chelsea boss and his superstars.

The 'plan' paid off

Lyon manager Rudi Garcia tempted fate before the game, saying his side did not have an "anti-Ronaldo plan" - and judging by his performance, Garcia was perhaps vindicated in his decision not to pay special attention to the Portuguese forward. Instead, they defended as a unit as they kept out one of the most feared attacks in Europe by remaining in their shape and making very few individual errors.

As Juve poured forward in search of the equaliser late on, centre-back Jason Denayer was equal to the challenge, as he first outmuscled Ronaldo to force him to mis-control the ball in the box, before stepping up just in time to play Dybala offside.

At the other end, Lyon were without captain and talisman Memphis Depay after the forward ruptured his anterior cruciate ligament (ACL) before the end of last year, but Aouar pulled the strings from midfield.

The number eight was the only change from the league victory over Metz but his balance and poise on the ball led to several chances, including the crucial assist for Tousart's winner.

Lyon have not progressed beyond the Champions League last 16 since 2010, but Garcia's pre-match plea of wanting "to upset the odds" is in touching distance.