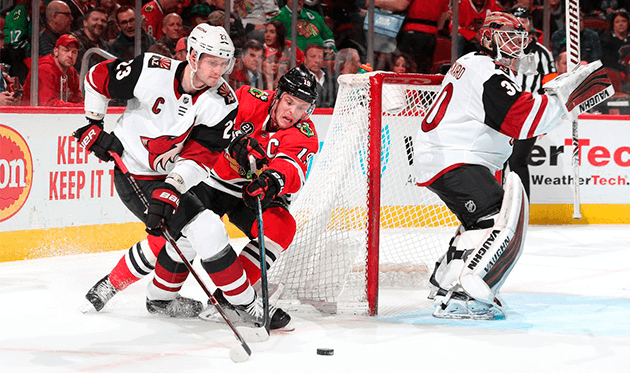 On December 13, Arizona, on its own ice with find out relations with Chicago, and our experts will give a prediction for this event with an excellent co-efficient.

“Arizona” usually doesn’t differ in effectiveness and spectacular game, but at the same time they are able to occupy high places and be in the top five of the Western Conference. For example, now “Coyotes” have 40 points and are in fifth position.

After victory over “Chicago” (4:3 B), the “Dogs” returned to there territory, where they suffered a major defeat from the “Calgary” (2:5). For the “Dogs”, first minutes of the starting period were unsuccessful, during which they missed two goals and were unable to correct the situation.

This season, “Chicago” is among those teams that score the fewer goals. Because of bad actions in the attack, the team is on the penultimate line of the Western Conference, and scored only 30 points from 31 meetings.

Suffered a defeat in the match with Arizona, the “Hawks” went on a trip, where they had already lost to “Vegas” (1:5). Patrick Kane, who scored 35 points, stands out among the other players’ shadows, however, his efforts are not always enough to get two full points.

In our opinion, “Chicago” has everything in order to avenge the recent defeat and will fight for two points in the upcoming match. In the last match “Hawks” found the keys to the defense of the “Coyotes”, but couldn’t keep the advantage. Now the situation probably will change, and guests will not make such a mistake.