Mannarino vs Mager: how will the game end? 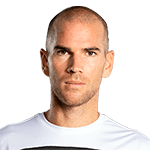 Adrian Mannarino will meet with Gianluca Mager in one of the matches of the first round in Sofia. Will the Frenchman be able to win? - read our forecast.

Mannarino is not in his best playing shape for this tournament. Still, the Frenchman has been playing very little lately. Adrian missed almost the entire American hard part of the season and played only at US Open. Of course, he failed to demonstrate anything good without preparation. He alreadt lost to Stefanos Tsitsipas in the second round

Despite all the recent setbacks, Mannarino can perform with dignity in Sofia. This is a very special tournament for him. Last year, for example, he reached the semifinals here, where he lost to the incredible Yannick Sinner.

Mager won 14 of 21 indoor fights in 2019, but this was rather an exception to the rule. Like most Italians, Gianluca prefers to play on clay. This is his favorite coating. But on the rest, he does not appear often. For example, he played 12 matches this season at all tournaments, except clay. The representative of Italy won only four victories.

Mager's last fight was a confrontation with Basilashvili in Metz. He lost to the Georgian with a score of 3-6, 5-7.

Fights are not Mager's strong point on hard in the hall. If he was in good shape, he could count on success in this meeting. Still, Mannarino lacks playing practice. But the Italian played himself four matches in the last month, in which he won one victory. We think that he will not cope with Adrian.

Our prediction is the victory of Adrian Mannarino with the odds of 1.60 on 1xbet.